Dupytren’s disease or sometimes referred to as “Viking’s Disease” is an inherited disorder of Northern European ancestry although all cultures have been affected. It is a disease of the palmar fascia, which is a layer of tissue that is below the skin and attaches the skin to the deeper structures to secure the skin so it does not slide and tear when a friction force is applied to it. The disease begins with the proliferation of myo-fibroblasts, which make collagen and is the predominant component of the palmar fascia. As the myo-fibroblasts grow they contract like little muscles and cause the fascia to contract, thicken and tighten until it begins to draw the involved finger down towards the palm. the ring and little fingers are the most commonly involved by the disorder. It can also affect the feet and penis.

There are many different treatments for dupuytren’s disease, which include multiple percutaneous cordotomies (cutting of the contracted cord or band in multiple locations allowing it to lengthen) with or without fat grafting, palmar digital fasciectomy (complete removal of the diseased tissue) of the involved finger and recently a new injectable medication (Xiaflex) to dissolve some of the cord and allow it to rupture. Xiaflex is an enzyme called collagenase derived from the bacteria Clostridium botulinum which breaks down the collagen and allows the cord to be ruptured at 24 hours after injection.

Each treatment has risks and benefits for specific indications. In my opinion complete removal of the involved tissue (fasciectomy) has the lowest recurrence rate and generally an excellent functional result. 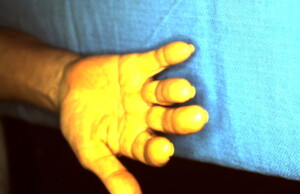 End on view of a metacarpophalangeal joint flexion contracture of the right ring finger. 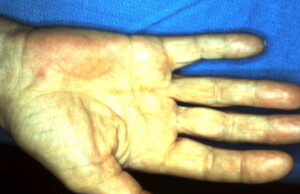 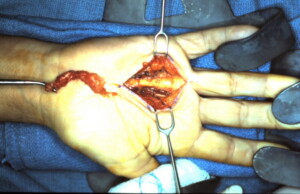 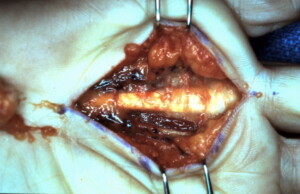 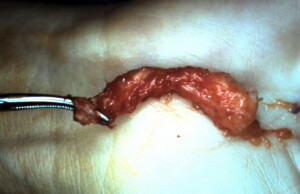 The diseased palmar fascia that was excised. 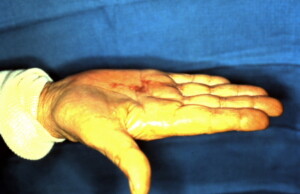 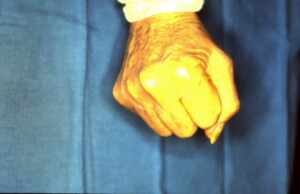