Table saws have long been known as one of the most dangerous tools to work with.  In fact, according to the Consumer Product Safety Commission, there are nearly 40,000 blade injuries every year. Nearly 4000 of these injuries involved amputation. The economic cost of these injuries amounts to more than $2.3 billion annually.

This case demonstrates a circular saw injury to the dorsal radial aspect of the index finger which was taken for exploration and repair of injured structures. The extensor digitorum comminus (EDC), extensor indicis proprius (EIP), radial collateral ligament (RCL) and first dorsal interosseous (1st DI) were identified and repaired. 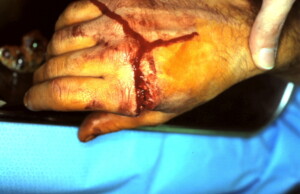 Circular saw injury to the index finger with laceration of the EDC, EIP, RCL and 1st DI was explored and injured structures repaired. A saw blade kerf of the metacarpal was also identified and required no treatment since the bone was stable. 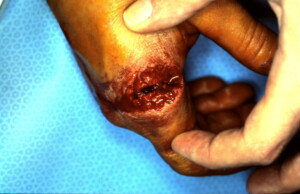 Radial stress applied to the index finger metacarpi-phalangeal joint reveals opening of the joint. The wound was explored, debrided and copiously irrigated prior to repair of the injured structures. 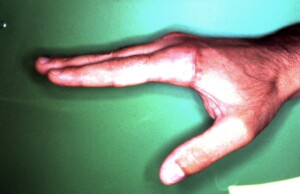 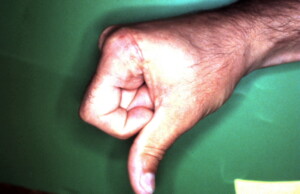 Near full flexion seen in the early post-operative period. Continued therapy improved this result so the patient could eventually make a full fist.