Sometimes called epidermoid cysts, epidermal cyst, epidermal inclusion cyst, infundibular cyst and keratin cyst commonly result from implantation of epidermis into the dermis, as in trauma or surgery. The superficial layer of the skin is impaled deeper and begins to produce keratin. The definitive diagnosis is made by a pathologist after excision based on microscopic appearance of a cystic lesion lined by cornified epithelium containing lamellated keratin. These lesions should be surgically excised when uninfected so the capsule or lining that produces the keratin can be completely removed in order to reduce recurrence rates and prevent an infection from developing if left untreated, which would require incision/drainage/packing and allowing the wound to heal from the inside out rather than complete removal. 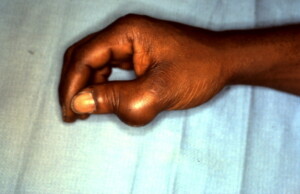 Mass present on the radial side of the right thumb metacarpo-phalangeal joint secondary to being impaled with a screwdriver several years earlier. 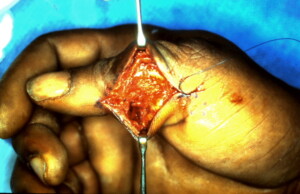 An incision has been made and the cyst has been dissected free from the surrounding structures care taken to preserve superficial censor nerve fibers and othe vital structures.

Here the cyst is being completely liberated. 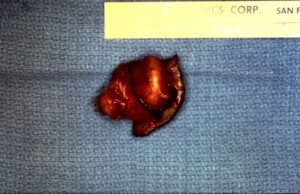 The specimen excised with a small amount of skin at the area of trauma from where the cyst originated.