Carpal tunnel syndrome (CTS) is a common result of the inflammation caused by rheumatoid arthritis. CTS occurs when there is pressure on the median nerve in the carpal tunnel, which is a narrow space formed by a semi-circle of bones on the back side of the wrist and a ligament that crosses the bones on the palm side of the hand.

Tendons also run through the carpal tunnel with the median nerve. The tendons are surrounded by synovium which is a slippery tissue that secretes fluid to lubricate the tendons so they may pass each other without friction. In rheumatoid arthritis inflammation of this tissue causes swelling,  and fills all the extra room in the carpal tunnel until pressure is applied to the median nerve compromising its circulation causing carpal tunnel symptoms including numbness, tingling and pain. 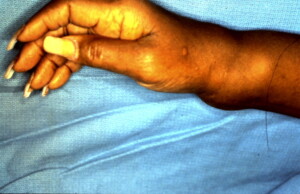 The hypertrophic inflamed synovium extends into the carpal tunnel putting pressure on the median nerve. 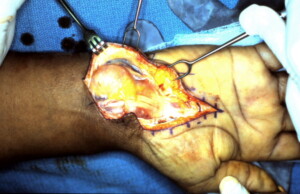 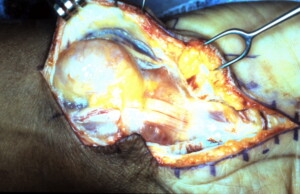 Rheumatoid arthritis produces a state of chronic inflammation which is believed to play a role in rice bodies.  Rice bodies are cells of a cartilage-like material that resemble grains of rice in tendons, bursae, or synovium. 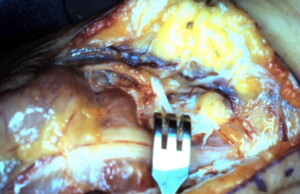 Compression of the ulnar nerve by a fascial band is evident in Guyon’s canal. 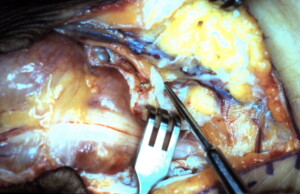 Probe under the fascial band compressing the unlar nerve in Guyon’s canal is demonstrated. 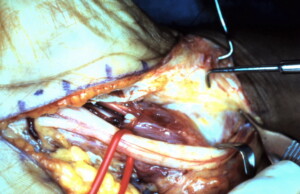 The flexor tendons and median nerve are dissected free of the large rice body and diseased bursae. 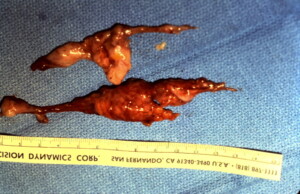 The diseased radial and ulnar bursae have been completely excised. 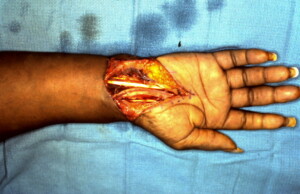 The carpal tunnel and Guyon’s canal have been fully released and all diseased tissue removed, providing decompression and relief of neuropathic pain and other symptoms related to nerve compression. 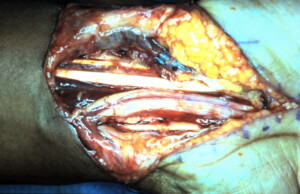 Close up view of decompressed hand.