Infections of the Hand

Hand infections can result from a myriad of causes and should be addressed rapidly as a delay in diagnosis and treatment can result in rapid deterioration, spreading to uninvolved tissues and significant functional disability. Most infections will have a defining cause i.e. an animal bite or puncture wound but sometimes will develop suddenly or gradually without an identifiable causable event  such as a paronychia.

A paronychia is either a bacterial or fungal infection of the tissues at the junction of the nail and the skin on the sides or top of the finger. They are associated with pain, swelling, redness, and sometimes drainage or a pus collection. It can be caused by nail biting, manicures, inadvertent local trauma, repeated washing away of  normal skin emollients or other unidentifiable causes. Treatment consists of warm soaks 3-4 times daily, oral antibiotics and if pus is present incision/drainage and even partial nail removal may be necessary for adequate treatment. 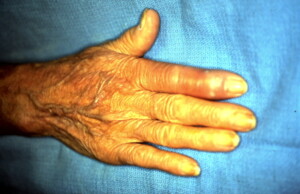 A severe paronychia of the index finger evident with a fluctuant area just proximal to the nail on the dorsal side of the finger. This infection required incision and drainage. The wound was packed open and changed several times until it was allowed to heal by secondary intension (inside out). 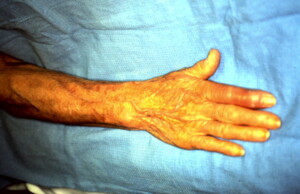 Here you can see the infection and redness was spreading up the finger and there was lymphangitic streaks indicating a more severe infection entering the lymphatic system. That is why urgent operative intervention was pursued.

A bite is a wound received from the mouth of an insect or animal including humans. Therefore a closed fist impacting someones mouth resulting in an open wound on the knuckle by the perpetrator is considered a human bite and the victims teeth may  have actually violated the joint. An animal bite victim may also incur serious bacterial infection as a result and can involve the soft tissue, joint or even bone and develop an infection of the bone called osteomyelitis, which can become life threatening if untreated. All bite wounds should be treated immediately for these reasons and to prevent the possibility of developing rabies. Animal bites to the hand most frequently occur on the fingers of the dominant hand of children between the ages of 5 and 14. Women are bitten more frequently by cats, and men by dogs.

Cat bites are very dangerous because the canine teeth are long and sharp and penetrate deeply. these wounds seal very quickly and trap the bacteria that is in the cats saliva deep in the patients soft tissues. One of the more common types of  bacterium is called Pasteurella multocida. An infected cat bite wound will be red, swollen and painful, and the infection can spread through the surrounding tissues, causing a condition called cellulitis, or ultimately develop into an abscess or spread through the lymphatics and eventually the bloodstream to other areas of the body, causing a condition called septicemia or blood poisoning. Infected people who develop fever and an elevated white blood cell count must be treated aggressively. Children, the elderly, ill and the immunosuppressed are particularly susceptible to developing severe infections if bitten by a cat. 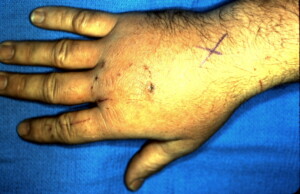 Small puncture wound from a cats tooth has inoculated the deep tissues on the dorsal aspect of this hand rapidly progressing to pain, severe swelling, redness and will progress without definitive treatment. 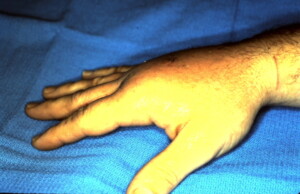 Lateral view demonstrates the sever degree of dorsal hand swelling and redness. This patient underwent incision and drainage of an abscess. The wound was packed open to allow continued drainage and to prevent further progression of the infection.

There are as many as three million animal bites in the United States each year. Dogs are responsible for most animal bites in this country (up nullto 90%), with cat bites accounting for about 5% of such injuries. 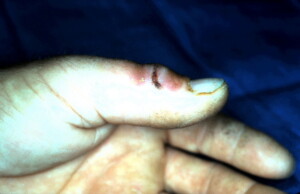 This bite involved the inter-phalangeal joint of the thumb requiring joint irrigation, packing and  intravenous antibiotics. 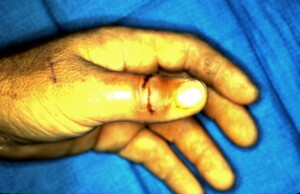 Human bites occur when a person’s fist is driven into another’s mouth, such as during a fistfight. When the skin is broken, bacteria can enter the soft tissue and the ‘knuckle’ joint, which if left untreated often results in deep infection of the joint which may cause long term destructive changes to the joint cartilage resulting in septic arthritis. These problems can be effectively obviated by early diagnosis, intravenous antibiotics, and surgery to drain the infection out of the joint and wash it out. 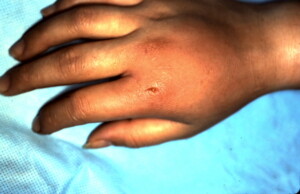 An innocuous appearing wound may prove to be devastating if the joint is involved and treatment is not rendered in a timely fashion. 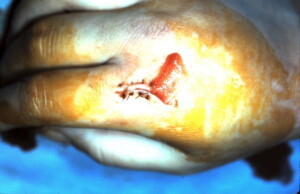 The puncture wound from a human tooth was explored and violation of the joint capsule was identified. Therefore, the joint was entered and copiously irrigated and packed open to allow drainage to prevent joint sepsis and cartilage destruction.

Large birds can cause serious injury or even amputation of digits children are especially vulnerable. An african grey, amazon parrots, and large macaws can easily bite off your finger, and african grey isnt as likely but has still has the crushing powert to do so. A macaw can their large beak is designed to eat hard fruits and nuts, so they naturally have the force to do it. In a blue and gold macaw it is estimated they have a bite force of 200lbs per square inch. 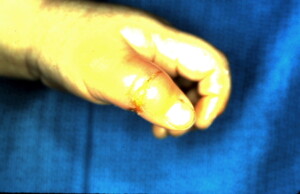 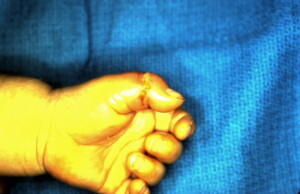 Lateral view demonstrates an extension lag.  This wound was explored and the extensor policis longus and dorsal joint capsule were violated. This easily could have resulted in amputation.

Brown recluse spiders are native to the Midwestern and Southeastern states.Brown recluse spiders are notable for their characteristic violin pattern on its’ back. The base of the violin at the head of the spider and the neck of the violin pointing to the rear. These small non-hairy spiders are yellowish-tan to dark brown in color with darker legs. They have legs about an inch long. They like dark, warm, dry environments such as attics, closets, porches, barns, basements, woodpiles, and old tires. The venom of the brown recluse is toxic to cells and tissues. This venom is a collection of enzymes. One of the specific enzymes, once released into the victim’s skin, causes destruction of local cell membranes, which disrupts the integrity of tissues leading to local breakdown of skin, fat, and blood vessels. This process leads to eventual tissue death, necrosis in areas immediately surrounding the bite site. 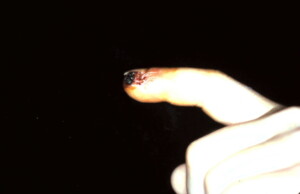 Lateral view of index finger bitten by a Brown Recluse Spider causing tissue necrosis that underwent debridement. The wound will be allowed to heal by secondary intention. 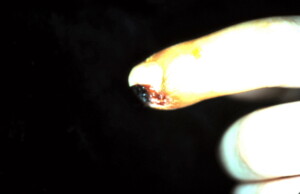 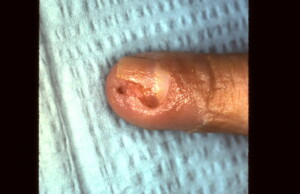