Forceful deviation of the thumb in a radial direction can cause tearing of the ulnar collateral ligament of the metacarpi-phalangeal joint. This results in pain and instability. The ligament most frequently tears off the base of the proximal phalanx with or without a piece of bone. If a large piece of bone is involved and/or is displaced surgery is needed for correction. If no significant displacement is evident this could heal with just a period of immobilization. If the ligament pulls out from under the sagittal band creating a Stenner lesion this injury can not heal without surgery since the end of the ligament is not near its normal insertion. 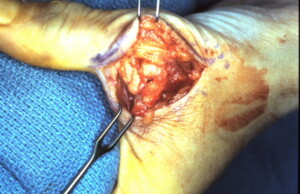 The ulnar collateral ligament has avulsed off of the base of the proximal phalanx and retracted from under the sagittal band which would prevent it from healing primarily. 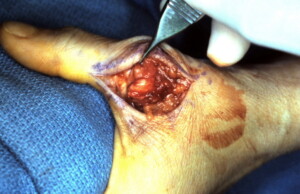 Avulsion from under the saggital band is called a Stenner Lesion. 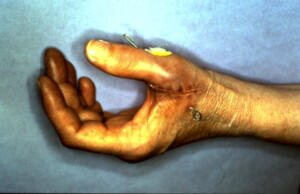 The ligament has been re-attached to the base of the proximal phalanx with a pullout stich placed through the bone and tied over a button on the radial side of the thumb. The joint has been immobilized protecting the repair with K-wires. 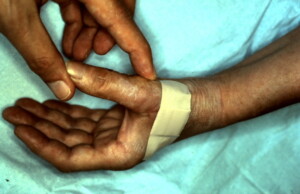 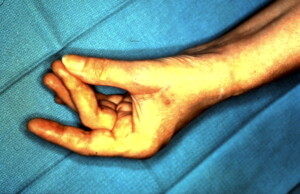 ressure applied in a tip pinch manor in attempt to snap the fingers demonstrating stability and lack of pain.