Avulsion of the ulnar collateral ligament of the metacarpo-phalangeal joint of the thumb is called a Gamekeeper or Skier’s thumb. If it is an old injury it may not be possible to re-attach the native ligament to the bone because of shortening and a graft will be needed to reconstruct the ligament. The graft may be woven through drill holes and channels created within the bone but this is laborious. A newer device that is placed into drill holes in the head of the metacarpal and base of the proximal phalanx can be used to suture the tendon graft and securely anchor the graft in place. 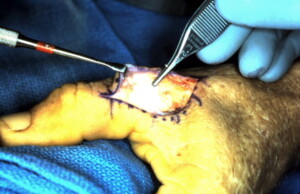 The ligament has been avulsed off the base of the proximal phalanx and is unable to reach its’ native position and therefore a graft will be needed to reconstruct the ligament. 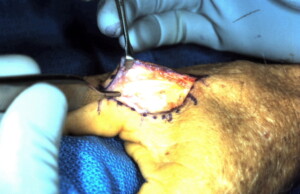 A graft of sufficient length was harvested and placed near the site of anchorage to confirm desired length of graft. 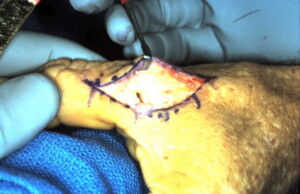 Joint space visualized by radial deviation of the thumb indicating loss of support from the torn ulnar collateral ligament. 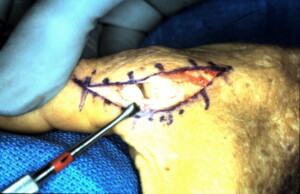 Close up of same as above. 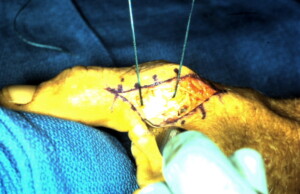 Anchors have been placed into metacarpal and proximal phalanx with sutures attached. 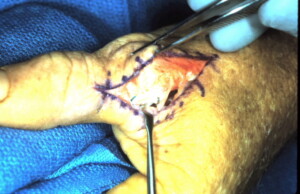 The graft is secured to the bone with the sutures attached to the anchors. Good stability of the joint is noted with ulnar stress applied to the joint.