Sensory deficits from old lacerations can be repaired with nerve grafting procedures as illustrated below. Nerve function will never bee restored to normal but can approach 80%. Generally we would like to restore protective sensation i.e.. being able to tell hot from cold and sharp from dull. In particular this function is extremely important on the border digits of the hand, such as the radial side of the index finger and the ulnar side of the little finger. 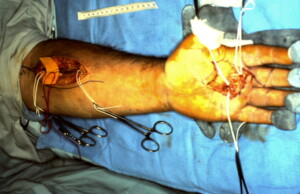 Palmar laceration re-opened to expose the multiple nerves that were injured. Proximally, the lateral ante-brachial cutaneous nerve is dissected in-situ prior to being harvested. 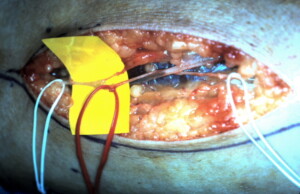 Close up of the lateral ante-brachial cutaneous nerve dissected ready to be harvested. 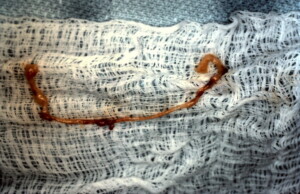 The nerve has been harvested. Orientation of the nerve must be maintained since the nerve will be inset in a retrograde fashion to prevent the growing nerve  from inadvertently being misdirected down a side branch, preventing it form reaching the end organ. 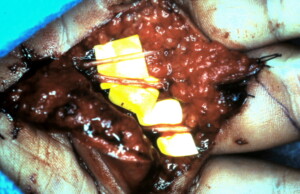 Here is an intra-operative photo showing the three nerve grafts after the micro-neurorhaphy is completed.

This is a patient with an old sensory deficit of the radial aspect of the left index finger secondary to a crushing injury with a large zone of injury requiring a long graft. 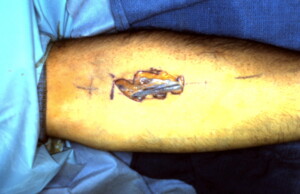 Volar aspect of left Forearm harvesting the lateral ante-brachial nerve to serve as a graft. 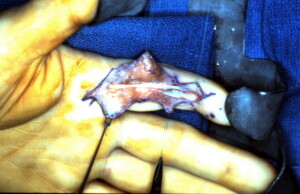 The nerve graft has been placed in a retrograde direction to make sure no nerve fibers will grow out any small branches of the graft before reaching the native nerve distally.