Ninhydrin is most commonly used to detect fingerprints, as the terminal amines of lysine residues in peptides and proteins secreted from fingers react with ninhydrin and produce a deep blue or purple color. These substances are not present on a finger if it is denervated. Therefore it can be used to determine nerve integrity and function. 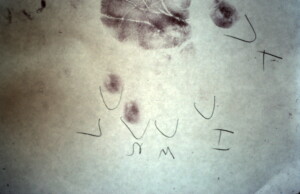 A two year old child sustained a distal wrist laceration. Motor function was grossly intact but sensory testing can be difficult with this age group. The child’s hand is placed on a fresh piece of white paper and pressed down, outlines are made around each individual digit. The paper is then sprayed with ninhydrin. The characteristic purple color is generated where there is intact nerve supply and sweat pattern leaving fingerprints. As evident the fingerprints of the index and middle fingers are absent indicating a median nerve injury. 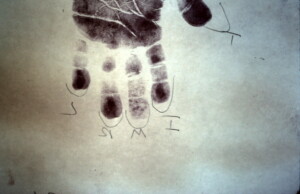 This is the same child approximately a year after repair of a near complete median nerve transection. Return of autonomic function is confirmed by using the ninhydrin spray test. Indicating good nerve regeneration.