Three forms of peripheral nerve injuries have been described.  Neuropracxia the mildest form, is often incomplete and produces a transient loss of function. Its key feature is spontaneous recovery that occurs within hours to several months of injury.  Axonotemesis,  refers to a complete interruption of the axon and myelin sheath while preserving the endoneurial core connective tissue structure of the nerve. Often described as a “neuroma-in-continuity,” this type of injury results in an immediate loss of motor, sensory, and autonomic function distal to the lesion. Spontaneous recovery can occur but requires more time than a neurapraxic injury and depends on a number of factors that affect the rate of nerve regeneration. The final type of injury, neurotmesis, implies a complete disruption of both the neural and connective tissue elements of a peripheral nerve. This type of injury is incompatible with spontaneous recovery and will ultimately require surgical intervention if any function is to be regained. 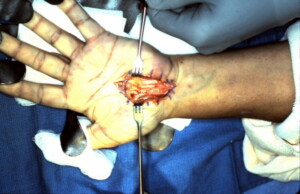 Injury to the common digital nerve of the left 3rd web space occurred in this patient during an open carpal tunnel release procedure performed elsewhere. 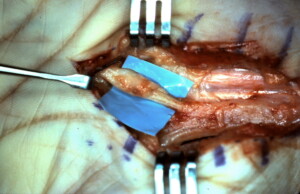 The Neuroma-in-Continuity is identified, isolated and dissected free from surrounding structures in preparation of excision and micro-surgical repair. 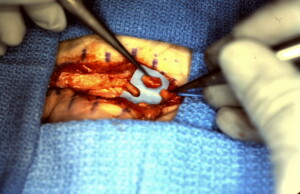 The neuromas has been resected. 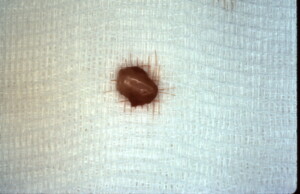 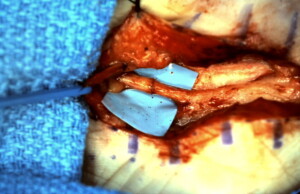 A primary micro-neurorhaphy was able to be performed without any tension. 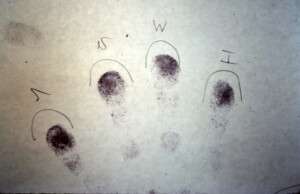 A ninhydrin spray test was performed to confirm return of autonomic nerve function and a normal sweat pattern after nerve regeneration. Near normal 2pt discrimination was also obtained.