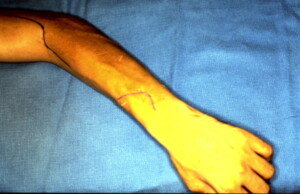 This shows the proximal incision marked out for the nerve grafting as well as a distal incision which was used for a pronator teres to extensor carpi radials brevis tendon (PT to ECRB) transfer to serve as an internal splint while the radial nerve was regenerating. 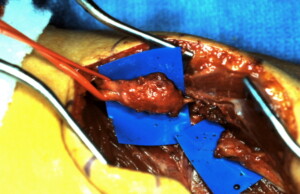 A vessel loop is around the proximal portion of the radial nerve with a large neuroma present. The distal end of the nerve is also visualized overlying the microsurgical background material in the right side of the wound. 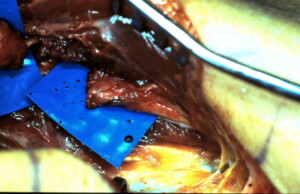 Close up of the distal end of the radial nerve. 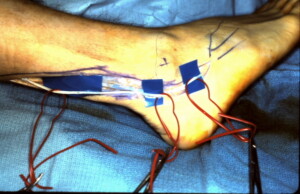 Sural nerve is being harvested from the lower extremity. The orientation of the nerve must be noted since it will be rotated 180 degrees and placed in a retrograde direction to prevent any axons growing from the radial nerve to exit the graft through side branches. 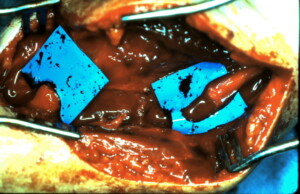 Both ends of the radial nerve have been prepared by cutting the nerve back until sprouting axons were seen proximally and neurilemmal sheaths distally. The gap between the two ends is measured to know how much graft is needed. 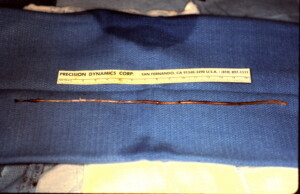 The graft is cut into three segments the length of the defect since the diameter and circumference of the radial nerve is such that three grafts are required. 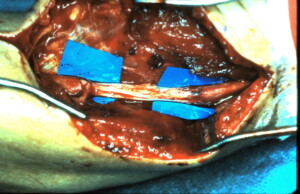 The grafts had been sutured together using a technique where pre-suturing multiple nerve grafts together (micro-surgically) was performed on the back table prior to insetting the nerve in the defect. This photograph demonstrates the three grafts already inset. 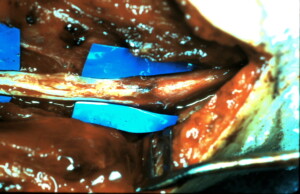 Close up of distal micro-neurorrhaphy.